For most of my life I have been buying poppies once a year from the Royal British Legion without really thinking about why. It has only been the last couple of years that I've really sat down and thought about it.

The Poppy Appeal was originally set up as a way to help the families of those whose lives had been torn apart by the Great War. It was never intended to be something that was continuous as it was hoped, maybe naively, that it wouldn't be needed because the world would see how devastating the war was and would try to avoid it in the future.

But of course more war happened and more war happened and now here we are in 2014 and what has the Poppy Appeal become? Yes it is still raising money to help families but it seems to have lost its other equally important message, that war is dreadful and destroys the lives not just of those fighting but also the civilians who live in the areas invaded . 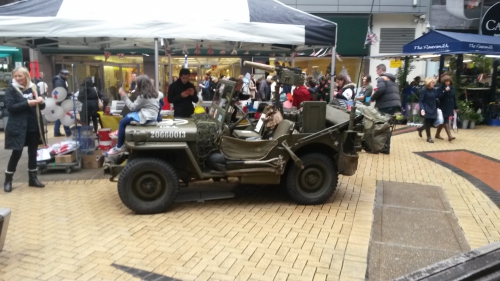 But it is this picture that has led me to write this message today, the picture of what I saw in Kingston town centre just yesterday. The Poppy Appeal team parading around with a military vehicle, a vehicle designed to kill and cause damage, children going up and having their photograph with it. It's disgusting, this is GLORIFYING war. "Look kids, you could grow up to drive one of these and kill some nasty foreigners"

Why is this glorification of war allowed to happen? Rather than a symbol for death and despair of what has past, I fear the poppy is being used as a symbol of Pride for the British army, of Pride that the Brits keep attacking other countries for little to no reason, at my most cynical it is being used as recruitment for a future generation of killing machines. No war is necessary and in this country nobody is forced to join the army, no one is forced to go out and kill. The military it is a choice made by the individual and drives like this are trying to show war as a glamorous career choice.

I am by no means suggesting that the work carried out by the Royal British Legion is not worth while and you would hope that it is, according to their website the Poppy Appeal raised £36.6 million last year and I imagine this year that amount will be far higher due to the centenary. Once these soldiers have gone to war and assuming they survive, they ruin their own lives from the trauma that they have seen, they NEED psychological help a lot of the time just to get back to living normal lives but you don't see the Poppy Appeal handing out pamphlets on Mental Health Problems.

And now to the Government, in raising money for the Poppy Appeal it relieves the Government from having to deal with the repercussions of the wars that they start. Imagine that £36.6 million for rehabilitation had to come from their budgets, maybe the wars wouldn't look so lucrative after all?

So anyway this year I have decided that rather than giving my money to a charity that unintentionally, in my eyes, is part of the problem I have donated to the Peace Pledge Union and am wearing a White Poppy this year and showing my support for Peace! A charity that since 1934 has been tirelessly campaigning for a warless world. If you want to do the same you can donate, buy a white poppy or just read about the work they do by clicking this link;

Even if you don't agree with anything that I have said here, I hope I have at least made you think about why it is you wear a poppy.