For those that don't know, this is my brother, he is 3 years older than me (26) and is heavily disabled. Gregory has been afflicted since birth with CHARGE syndrome which is very complex but the obvious symptoms you will see in him is deafblindness as well as not talking.

This weekend, 3rd & 4th December 2011 was the first time tat Gregory has come home since mum died back in February. Don't get me wrong we have seen him plenty of times at his home near Guildford but through a mixture of fear and disorganisation he hasn't been here. So this weekend was always going to be a tough one but it was necessary as we hope to have him home for Christmas.

A number of things have happened since the last time Gregory was here barring the obvious mentioned above; I have got my new job caring for people with disabilities and Gregory has progressed a lot at his home since his giving up of musical toys. I will start with the latter and move backwards.

Gregory, from a young age has been obsessed with children's musical toys, the kind that play a generic, repetitive tune. Gregs would play with them all day and all night... 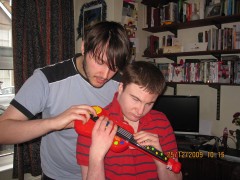 and then all of the next day... and all of the next night, you get the idea. Being family we only saw the positives of this, that they were bringing him immediate joy and not the side affects that they were causing him to wind himself up and get agitated. It took a number of years but this was noticed at his home and they slowly started phasing out his toy usage and sure as anything his behaviour improved drastically. Over the course of the last year this affect has continued to show with his sleeping and eating improving as well has his attitude towards doing outside activities, he now does things such as bowling, boating and even archery.

Onto my 'new' job, I invert that due to the fact that I have now been in the position for over 5 months and thus it probably doesn't constitute new anymore although I am still within my probation period until December 27th. My official title is a Support Worker and I get to do all sorts of things from serving food to people with disabilities to taking them out to exciting places such as bowling alleys, parks, restaurants, cinemas etc. It is a very rewarding job and one that is nothing like anything I have done before. Through this job I have gone on training courses to learn the likes of first aid and food hygiene as well as how to protect vulnerable people. All of this training has definitely affected how I treat my brother now though. I still see him through family eyes as before but rather than just pandering to his every desire as I would have in the past I now can see that some things can be done to benefit him better in the long term.

Anyway back to this weekend and how the above has come into play. When Gregory first got home he seemed confused about where he was but within 10-15 minutes he seemed to remember everything about the house which is astonishing considering his lack of vision. At first Dad and I were pandering to him and gave him chocolate bar after chocolate bar but soon even Gregory grew tired of that and so we made him some real food which he ate happily. Soon after Gregory went upstairs and was looking for his toys. 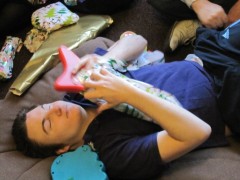 Now, even as the home were phasing out the toys there were always some here at our house but not any more... Gregory felt around the room for a while but to no avail and this is where my instincts from my job kicked in. I found a radio, turned it on and gave it to him. In bygone times he would have destroyed it in seconds but his improved behaviour meant that he patiently listened to it and because, unlike his old toys it wasn't a repetitive pattern he wasn't working himself up. A perfect solution! Furthermore though I started to notice a pattern in his behaviour towards individual songs on the radio, to some he noticeably was dancing to some he was fiddling with the buttons (on the toys pressing buttons would change the tune). I found this intriguing for the first time ever I could actually see and define my brother's taste in music, some of it I approve of he took a real shine to Vampire Weekend's 'Holiday' but unfortunately he did also seem to enjoy Olly Murs which I can't say I agree with.

We listened to music in his room for a couple of hours before Gregs decided to go downstairs for a bit and try and raid the cupboards for some more chocolate. I was having none of it now though and I convinced him that it would make him feel sick. Family and friends came to see him and then left and it was getting towards midnight with him just relaxing downstairs. He had a few angry shouts throughout the evening but nothing major, a definite improvement on his behaviour of old. One behaviour really hasn't changed though and that is his lack of sleep, even when both he and I know he is tired he fights it and tries to stay awake and so here I am at 3:30 in the morning watching over him and writing this blog. He has settled down though so fingers crossed I won't have to stay up too much longer!